What is meant by IAS? What is the full form of IAS? 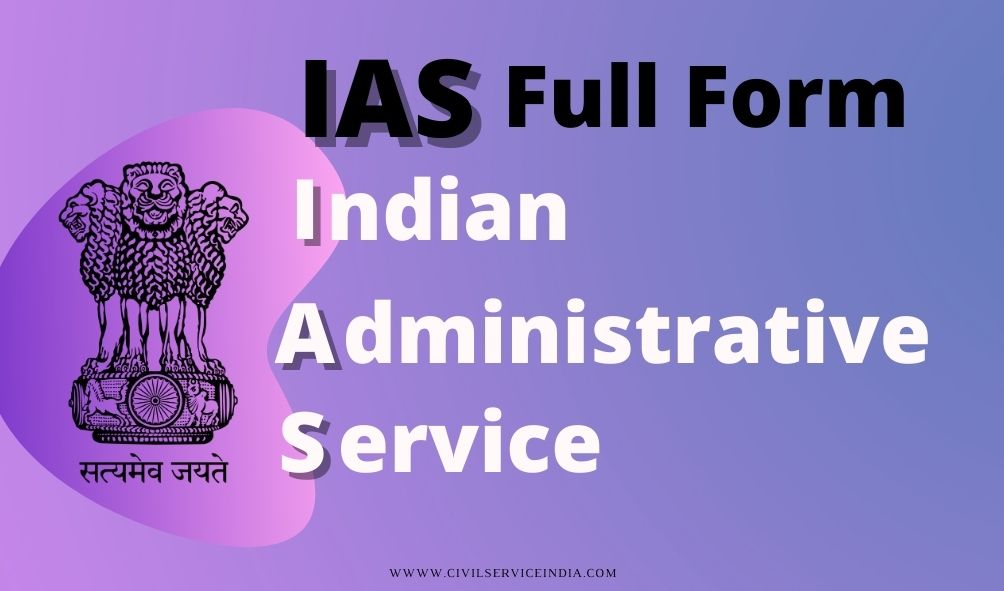 The Indian Administrative Service is popularly referred to as the IAS and was formally constituted in 1947. It is the premier service in India and offers an attractive and challenging career. There is fame and glamour also associated with this service for those who have excell in their posts. Even though most people think being the District Magistrate or Collector is the most powerful and glamorous post, an IAS holds power at all levels of his/her job. IAS is the service that places the officer right at the top of any government organization. If you are a determined person you can change a lot of things as an IAS officer.

The IAS officers handle affairs of the government. At the state and central level, this involves the framing of the policies and its implementation. At the district level, IAS is concerned with district affairs, including developmental duties. At the divisional level, the IAS officers look after law and order, general administration and various developmental works. Becoming a collector is just one of the jobs an IAS officers takes up in his long career. As secretary of various departments an IAS officer heads the organisation and takes it ahead.

IAS being an 'All India Service' follows the Cadre system. In this system officers are allotted to state cadres, not necessarily to your home state. So for all practical purposes you belong to that state service but may be deputed elsewhere in the country. However you'll always be recognized by your allotted state cadre. This system though very useful tends to positively and negatively affect the careers of an IAS officer. The cadre system is allotted on a basis of lottery and only the toppers of each state may get a chance to serve their home state if they have opted for such a preference.

Along with the selected Civil Service officers, the trainee IAS officers have to undergo 15 weeks training. Here after they are shifted to the two stages of training before serving the actual service.

In stage I of the training, the officers learn to expand the perfect proficient qualities in managing the huge arrays of tasks which has to be taken up for the first 10 years of service that is for 26 weeks. Then district training for several parts of administrative responsibilities of regional sorts, including location study of assignment for the academy. The duration is of 52 weeks where the officers experiences about the actual execution of the regional administration. The district training aims for the allotment of Cadres for the actual appointment.

In stage II of the training, the officers have to execute the district level tasks experiences acquired in a course of one year onsite training along with the skilled program learned in foundation training.

On successful completion of probation for almost two years, the IAS officers are placed as SDM (Sub Divisional Magistrate also known as District Magistrate or Sub-Collector). On this position the IAS officers lead the department with key responsibilities of Revenue, General Administration, Developmental Work, Law and Order as per their work assignment.

How to become an IAS officer?

The eligibility criteria for the IAS exam is the same as for other civil services services under the combined exam by UPSC. One of the primary criteria is that candidates must have Bachelors degree in any discipline from a recognized university. Candidates are advised to check the eligibility criteria before applying. Candidates appearing in the final year exams can also apply. Once the candidate clears the civil services and gets allotment to the IAS as per his rank, he has to go through specified training. Usually the toppers get the IAS.

IAS eligibility for persons with disability

People with the following disabilities & Physical conditions can be selected into the IAS.

The syllabus for the civil services exam in 2023 and every other year is the same for the IAS as well as other services. There is generally no difference from year to year. Once in a few years they may tweak or overhaul the syllabus or pattern of the exam.