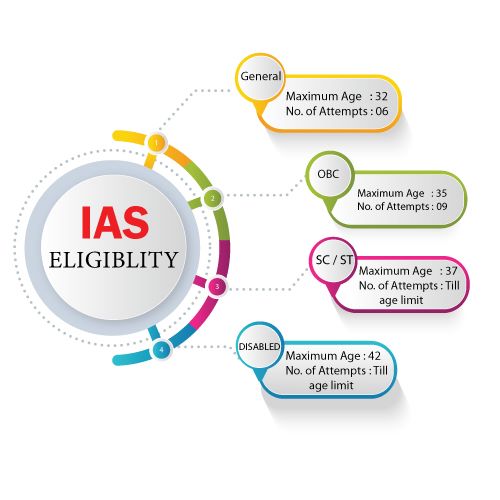 A candidate must have attained the age of 21 years and must not have attained the age of 32 years on 1st August of the year of examination if he is a general category student / aspirant. The upper age limit for IAS as well as all other services as explained in diagram below is relaxed for OBC, SC, ST and other categories of aspirants. The age limit for UPSC has been very well explained in the video below. Watch it to get a clear understanding of the age limit for OBC and other categories. In a nutshell the Upsc age limit starts at 21 as no candidate can be younger than 21 years of age. The upper limit is 50 years if he is a domicile of J&K and is handicapped.

NOTE I:
Candidates belonging to the Scheduled Castes and the Scheduled Tribes and the Other Backward Classes who are also covered under any other clauses of para 3(ii) (b) above, viz. those coming under the category of Ex-servicemen, persons domiciled in the State of J & K, blind, deaf-mute and orthopedically handicapped etc. will be eligible for grant of cumulative age-relaxation under both the categories.

NOTE II:
The term ex-servicemen will apply to the persons who are defined as ex-servicemen in the Ex-servicemen (Re-employment in Civil Services and Posts) Rules, 1979, as amended from time to time.

NOTE III:
The age concession under para 3(ii) (b) (v) and (vi) will not be admissible to Ex-Servicemen and Commissioned Officers including ECOs/SSCOs who are released on own request.

NOTE IV:
Notwithstanding the provision of age-relaxation under para 3 (ii) (b) (vii) above, a physically disabled candidate will be considered to be eligible for appointment only if he/she (after such physical examination as the Government or appointing authority, as the case may be, may prescribe) is found to satisfy the requirements of physical and medical standards for the concerned Services/posts to be allocated to the physically disabled candidates by the Government.


Right Age for qualifying in UPSC

Some of the advantages of cracking the UPSC exams at an early age are:

Is it too late to qualify at the age of 31 and above?

Average Age of sucessful Candidates in the UPSC

Most of the candidates who clear the UPSC civil services fall in the age bracket of 26 to 28 years. Even the NITI Aayog is recommending the age limit for general category aspirants be brought down to 27 from teh current 32.