What is GST bill and how it impacts on common man

Indirect Tax system is highly complicated in India because there are various types of taxes that are charged by the Central and State Governments on Goods and Services. These taxes include Entertainment Tax for watching film, Value Added Tax (VAT) for purchasing goods & services by consumer. Other taxes are excise duties, Import Duties, Luxury Tax, Central Sales Tax, Entry tax, and Service Tax.

Businessmen have to maintain accounts which need to obey with all the applicable laws.

Many experts have suggested that to resolve the issues of different types of taxes, there is a need issue to streamline all indirect taxes and implement a "single taxation" system. This system is entitled as Goods and Services Tax, abbreviated as GST. The GST will be levied both on Goods and Services.

In simple term, GST is a tax that people need to pay on supply of goods & services. Any person, who is providing or supplying goods and services is responsible to charge GST. GST is the huge reform in indirect tax structure in Indian financial scenario since the economy originated to be opened up 25 years ago, at last looks set to become reality. The Constitution (122nd) Amendment Bill introduced in Rajya Sabha recently, on the back of a broad political agreement and heightened by the good aspirations of the Congress. Goods and Services Tax Reform was passed in Rajya Sabha and it will be set to bring in lok Sabha.

The proposed model of GST and the rate:
A dual GST system is scheduled to be implemented in India as proposed by the Empowered Committee under which the GST will be divided into two parts:

Application and tools of goods and services taxes 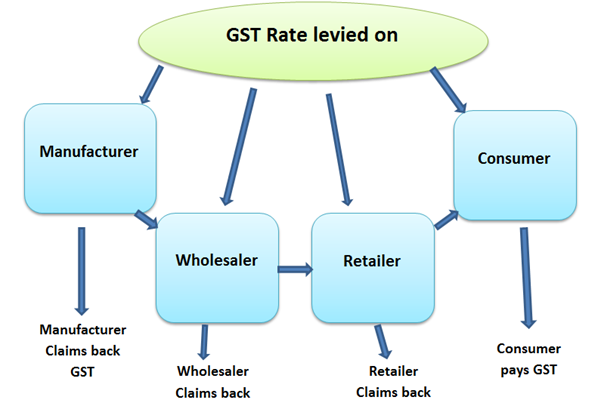 GST will be charged on the place of consumption of Goods and services. It can be levied on following:

Besides benefits, there are several challenges in implementing GST bill.
- To implement the bill, there has to be lot changes at administration level.
- GST, being a consumption-based tax, states with higher consumption of goods and services will have better revenues. So, the co-operation from state governments would be major factors for the effective implementation of GST.

It is assessed that since GST substitutes many flowing taxes, the common man may get benefit after implementation. But it depends on rate fixed on the GST. With the execution of GST, a consumer will pay less tax.

GST is also advantageous for companies. GST will cut the number of taxes under the current system like VAT, excise duty, service tax, sale tax, entertainment tax, luxury tax. Single tax will be applied on both Goods and Services. This will save the managerial cost for companies.

The current indirect system is so burdensome that the trucks have to stop at check posts and toll plazas for weeks to get the clearance to enter the state which considerably lessen their average distance travelled per day. With the application of the GST, the trucks need not to stop on check posts. Therefore, it will reduce the buffer stock. In this way, it will increase the operating proficiency of the companies.

It is assumed by experts that the most substantial opposing impact for consumers may arose because petroleum is excluded of the GST domain. Subsequently, the tax costs (taxes other than GST will continue) could have a flowing impact on the whole economy. According to news reports, economic adviser has mentioned that "bringing electricity and petroleum within the scope of GST could make Indian manufacturing more competitive". Additionally, certain challenges in-built in the GST structure, such as a GST levy on maximum retail price (MRP) for packaged goods and GST on barter exchanges, will trouble to the common man.

Other economic evaluators inferred that GST will eliminate flowing effect of taxes rooted in cost of production of goods and services and will provide seamless credit throughout value chain. This will considerably decrease cost of home-grown goods and will encourage ‘Make in India’. The sectors which have long value chain from basic goods to final consumption stage with operation spread in multiple states such as FMCG, pharma, consumer durables, automobiles and engineering goods will be the major recipients of GST system. It is supposed that GST will simplify business operations in India. Integration of existing multiple taxes into single GST will considerably lessen cost of tax compliance and transaction cost

To sum up facts, the GST is an indirect tax which entails that the tax is approved till the last stage where it is the purchaser of the goods and services who bears the tax. The GST will substitute most other indirect taxes and synchronize the differential tax rates on mass-produced goods and services. The government of India claims that GST will enhance Indian GDP by 2%. With the enactment of GST, customers will have funds to spend because of lower tax rates. It can be said that it will completely change the indirect tax system in India.